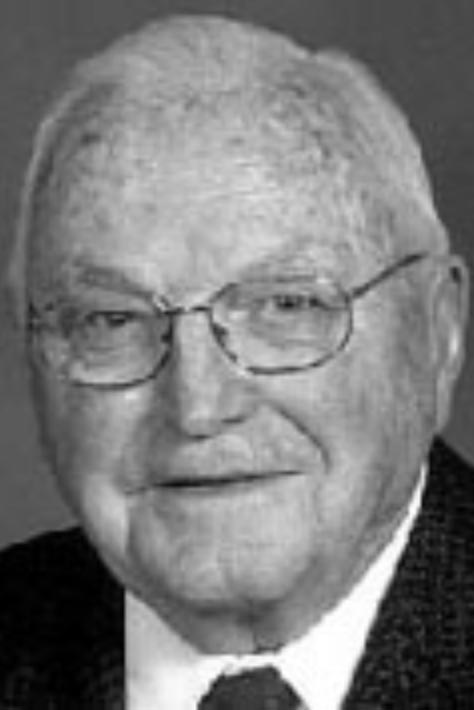 Paul E. Weimer was selected to be the 2008 recipient of the St. Thomas More Award sponsored by the Catholic Diocese and St. Bernard Church, Akron, Ohio. The award was presented to Mr. Weimer at the Red Mass held May 9, 2008 at the church. The award is given each year, during Law Week, to a member of the legal community in recognition of his or her personal integrity, professional excellence and community service.

This year’s honoree is a lifetime resident of Summit County, and a graduate of Garfield High School (1941). His college education at the College of Wooster was interrupted by service in the U.S. Navy during World War II, where Weimer served as an officer aboard the US 709 (L) and the LST 732. He was awarded three Battle Stars in the Liberation of the Philippines (1944-1945) after post-war service in Shanghai, China, (1945-1946) with the U.S. Seventh Fleet: He resumed his studies at the College of Wooster and then graduated from the College of Law at Ohio State University in December, 1949.

Weimer commenced the practice of law on March 1, 1950, and remained active as a lawyer until his retirement from the firm of Roderick, Myers & Linton in March 2000. During this 50-year span, he was active in the Akron and Ohio State Bar Associations; served as an incorporator member of the Akron Bar Foundation; served a three-year term on the Board of Trustees; was an original member of the Scanlon Inn of Court; established, at the request of Visiting Nurses of Summit County, a legal service of 18 Akron Bar lawyers to advise on legal issues facing families with patients in hospice; was appointed special counsel to the University of Akron by the Ohio Attorney General to assist in the transition of the University from a Municipal to a State University (1968-1969); continued to serve as General Counsel to Akron University until 1971; represented small, family-owned corporations that did not have legal departments in-house; developed a highly regarded environmental law practice by representing homeowners in Summit, Stark, Cuyahoga and Geauga counties whose homes were damaged by sanitary landfills operating in those areas; served as mentor to young Akron-area attorneys, both within his law firm and outside his office; and, by appointment of the Supreme Court of Ohio, served as a Member of the Commission on Character and Fitness and on the Commission on Continuing Legal Education.

He served as counsel to, and member of, the Firestone Park Community Council, a diverse group of concerned citizens dedicated to improving deteriorating conditions on Aster Avenue in the heart of Firestone Park.

Weimer served on many committees of the Metropolitan YMCA, including the Camp Y-Noah Committee of Management (of which he was Chairman); the Neighborhood Boys Committee of Management; the Annual Membership Drive, which he chaired in 1963; the Board of Trustees of the Metropolitan Board (which he chaired for two years; and he is currently an Honorary Life Member of the Board of Trustees and Honorary Life Member of the YMCA Foundation Board.

Weimer was a member of the First Methodist Church of Cuyahoga Falls since 1950, where he has served on various church committees. In 1981, he prepared the legal document establishing the Gift & Memorial Committee of the church. He has served many years on the committee responsible for receiving, investing, and distributing gifts, bequests and memorials received by the church.

Weimer served for many years as an active Board Member of Goodwill Industries of Akron, which affords employment and services to the handicapped in the community. In recognition of his contribution to the United Way of Summit County and his service to this charitable organization, the Senate of the 122nd General Assembly of Ohio unanimously adopted a Resolution (September 18, 1998), which Resolution reads, in part, “On behalf of the members of the Senate of the 122nd General Assembly of Ohio, we are pleased to extend special recognition to Paul Weimer for outstanding service to the Community as a United Way Volunteer …. An active volunteer with Goodwill Industries of Akron, you have served as Secretary, Vice-President and President of the Board of Trustees, and as a member of the Policy, Nominating, Financial Development and Properties Committees …. Thus, with sincere pleasure, we commend you for your exemplary record of community service and salute you as one of Ohio’s finest citizens.”

Mr. and Mrs. Weimer celebrated 63 years of marriage on May 18, and are the proud parents of four adult children – two of whom are graduates of the Akron University Law School – nine grandchildren and four great-grandchildren.

Looking for more information?  Reach out to us today!